Out in the campo - Finca Las Lomas Agricultural Complex

Like most people, I've often stood on the Corredera in Vejer and looked out over the fields below without really knowing what I was looking at, so I was delighted when Miguel Ángel Romero invited me and Enfoque Casa photographer Marcel Snyders (http://www.enfoquecasa.es) to take a look at Finca Las Lomas, the farm those flat, green fields belong to.
The Las Lomas site, originally part of the Medina Sidonia empire, was purchased in 1900 by José Mora Figueroa y Daza, the seventh Marquis of Tamarón, who named it ‘La Finca de La Janda.’ In 1910, it passed to his eleven sons.
In 1941, José Ramón Mora Figueroa de Allimes, the father of the current owner, bought the Las Lomas holdings from his uncle and expanded the estate by adding other purchases. José was a man with a project. Since childhood, he had dreamed of draining the La Janda wetlands and converting the land into productive farmland.
His dream wasn't achieved easily, but by 1967, the area was finally drained using Dutch technology, and developed as high-quality farmland, part of a business empire which has made its owners one of the wealthiest families in Andalucía.  Las Lomas, stretching between Vejer and Benalup,  is now among the great latifundias of Andalucía and one of the most extensive farming organisations in Spain, a modern and highly mechanised set-up, which boasts, among other things, the largest leek-processing shed in Europe. Its cattle bloodlines are said to be the finest in Spain.
Las Lomas was one of the sites enjoyed by General Franco, who visited every year to hunt and enjoy the prospect of a peaceful countryside. Witnesses remember him travelling slowly from Madrid with his escort, rather like a Royal Progress, and have commented on the insensitivity of his people, who, in those times of hunger, shot hundreds of animals in a single day, and joked that they were 'tired of eating'. Many local people enjoyed having their photo taken with the Caudillo.


While the Generalisimo usually stayed overnight in Barbate - 'Barbate of Franco' - his retinue was quartered in Vejer, earning the town the name 'Vejer of the Escort'. Las Lomas fitted so neatly into Franco's vision of a peaceful countryside, peopled with obedient and productive workers, that an artificial hill, 'La Cuesta de Franco', was built there from which he could survey this pleasant scene.    Las Lomas people were well-looked after in comparison with the impoverished campesinos in other areas, a rare example of the benevolent aspects of feudalism, and though Franquismo is now a distant memory, Las Lomas has always tried to look after its people.
In tandem with the reclamation of the land came modernisation and mechanisation, and this intensified at the turn of the century as local workers moved away to live in other areas. The processing plant we visited was opened in 1988.


We were warned that as we approached the finca, we should drive carefully. One of the five companies which make up the complex still organises game shooting parties for the sporting-minded. The game birds, pheasants and partridges, are plump, lazy and complacent. They don't feel the need to get out of the way when a car approaches. Rather the reverse, as a van makes daily trips around the estate to replenish their corn dishes, filling their small brains with pleasant associations.


Other companies within the Las Lomas complex deal with cattle, cotton and cereal production, but we were there to see the horticultural section. The company produces a range of vegetables for export to Northern Europe, ninety percent of which end up in British supermarkets like Waitrose, Tesco, Sainsbury's and Asda. These supermarkets set high standards, and about about one third of the produce is discarded and sold on to food manufacturers for juice or other products.


As we looked around, we marvelled at the pearly-white, perfect cauliflowers, all uniformly sized, which stood waiting for despatch to Tesco. The vegetables are packaged in the factory, so I had the rather surreal experience of seeing the grapefruit which would shortly be on sale in my local UK supermarket getting bagged and labelled in English.


Miguel Ángel provided us with white coats and cheery orange caps for our visit to the factory sheds and explained to Marcel that photography was not allowed inside the processing areas. First, we saw the cold rooms, cavernous spaces wreathed in murky vapours, which are designed to maintain produce at optimum temperature and humidity. Produce normally stays in storage for one or two days before being shipped out on one of the twelve or fifteen lorries which leave the complex every day, seven days a week.

We visited two processing sheds, where twenty or so women were skilfully separating the grapefruit which whizzed onto the belt from the chutes above. The women specialise in one particular type of produce, so their work is seasonal, though their line managers are permanent employees. Music is often played through overhead speakers, as this has been found to improve production. The space is large, high and light, a comfortable place to work, though the work itself is repetitive. Fork-lift trucks dashing in every direction lent a touch of drama to the proceedings. 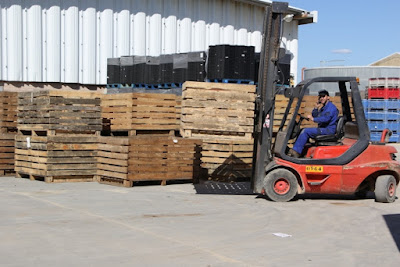 Las Lomas produces a range of vegetables including some, like parsnips and kale, which are hard to find in Spain. There's a beautifully juicy red grapefruit and spring greens, rarely seen in the shops here. Leeks are Las Lomas' biggest seller, though they weren't in season yet. Last year, Las Lomas sold 1.4 million leeks, and orders for this year are already up to 1.9 million. A chart on the wall reveals which of the women were the champion leek processers last season.


One third of Las Lomas' output is now organic and the company recently gained an international award for environmentally responsible production. There's an all-round commitment to conservation. Rabbits are trapped and sent to feed endangered eagles, and the organisation supports several other wildlife projects. As the complex is on a bird migration route, there are no wind turbines.


After we'd had a look at the processing sheds, Miguel Ángel and his colleague Rafael drove us around some of the fields to look at the irrigation systems, which I'd often admired from the road. Man-made channels, fed by the River Barbate, are connected to long watering rigs which creep slowly across the fields, sprinkling as they go. Because the land is on the site of former wetlands, the water table here is high, and Las Lomas has a water supply which would last for seven years, even if no rain fell, an unlikely scenario on these Atlantic shores.


As we drove, small clusters of spanish sparrows flew out of the growing wheat. These birds can be elusive, so it was good to see them here in healthy numbers, as well as the large raptors hunting through the skies.  I was impressed by the height of the wheat, which was twice as high as it is in the UK in early March.

In the past, Las Lomas was a thriving small community, and about 150 people still live there.   There's a large manor house which accomodates the present owner, José Mora Figueroa, a descendant of the Tamarón family and also a member of the Domecq family from Jerez. A secondary school for country children was opened in 1970 and has strong links with the company, which manages an organic garden for the school and offers support to its students. And the Prince of Wales comes regularly to play polo on the competition ground. There's a lot more to that stretch of flat land than meets the eye. 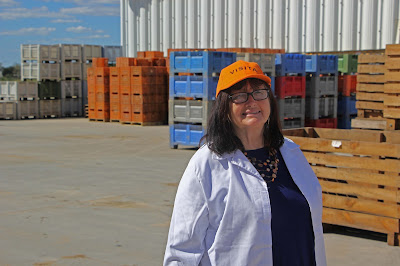 For information about the birds of La Janda:
https://theresagreen2.wordpress.com/habitats/open-countrysidefarmland/la-janda/la-janda-bird-
calendar/

Thanks to Marcel Snyders for the photos.