This weekend, Vejer will celebrate one of its heroes. Juan Relinque was a fifteenth-century campaigner who took on the wealthy Dukes of Medina Sidonia, and despite suffering insult and imprisonment, secured the ancient right of the people to the lands which had been allocated for public use after the Reconquista. The following is an edited extract from my book, 'Vejer de la Frontera: A History', first published in 2011.


The story begins after Vejer was liberated from Islamic rule in 1264. King Sancho IV granted land to the incoming Christian population in order to help them survive in their new home. In 1307, King Fernando IV granted jurisdiction over Vejer to Alfonso Pérez de Guzmán, the first Duke of Medina Sidonia, on condition that the law regarding the hazas was respected. This condition was initially respected. However, as time went by, the nobility began to abuse their privileges. Although agriculture was the main source of income in the 15th century, much of the land granted by the Crown to the people of Vejer for pasturage had been appropriated by the Dukes for the cultivation of wheat. Much of the profit from local fisheries also went to the ducal house.

As the 16th century advanced, Vejer's economy came under increasing pressure, until in 1535, the situation became unbearable. The people of had repeatedly requested the return of the rights originally granted them by the Crown, but their demands were ignored.  Meanwhile, Juan Alonzo, the current Duke of Medina Sidonia was busy enclosing public land for his own private use, imposing levies on agricultural production and monopolizing public utilities such as ovens and mills. Worst of all was the limiting of public access to farmland which had been enjoyed as communal ground since the repopulation of Vejer – the Hazas de Suerte.
Matters came to a head when a tax on wine was announced. Juan Relinque was a talented individual who owned property, including a vineyard, on the outskirts of town. It is possible that he had some legal training, though 16th century Spain was  one of the most litigious societies in history. Illiterate peasants and even slaves went to court and did not only sue each other, but also took on their lords. Relinque was clearly well-advised on the law of the land, but there is no clear evidence of the source of his information.
Relinque quickly realized that the Duke was not recognizing the rights the people were entitled to according to the royal charter by which the Dukes of Medina Sidonia administered the town. He officially expressed his rejection of the new demand, but the estate dismissed his document. Supported by a number of fellow citizens, Relinque took his complaint to the Royal Chancery at Granada, requesting protection for his plea against the Duke.
A royal decree was issued, instructing the seigniorial authorities to respect his right of appeal. In December, Relinque presented his first demand, denouncing the Duke for the tax on wine, and challenging sales taxes on other goods, such as linen, on the grounds that since the Repopulation, Vejer had been entitled to the privilege of free trade. The citizens of Vejer argued that having paid the statutory ten percent to the estate, they were not liable for further charges, and claimed that Relinque had been unjustly dealt with by the authorities.   The Duke, apparently prevented by arrogance from seeing the writing on the wall, continued to maintain that the estate was his, and he would do what he wanted with it. 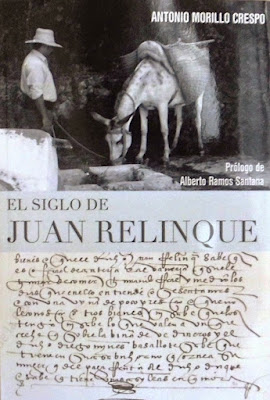 Nevertheless, support for Relinque and his followers continued to grow, and the Duke appealed to Granada for the right to punish the rebels. On Corpus Christi day, 1536, the town crier announced on behalf of the estate that communal lands were to be sold to pay estate expenses. Relinque and some of his supporters, meeting on the Plaza de España, confronted the estate office, causing ‘scandal and commotion’. Relinque and his people were removed to Sanlúcar de Barrameda and imprisoned there.
In November of the same year, the Duke’s Procurator requested that the prisoners should remain under lock and key. However, Relinque was permitted to leave jail in order to plead his case, and far from being intimidated, as the Duke presumably intended, took up the cause with renewed enthusiasm. In May 1537, a royal decree recognized six separate abuses which had been carried out by the Duke.
Not yet satisfied, Relinque continued to press his case, despite an attack of cold feet on the part of some of his supporters, and obtained permission to proceed with a demand for fiscal equality, on the understanding that his case would be prosecuted for the general good, and not for the benefit of any individual.
During this period, several attempts were made to intimidate Relinque and his followers. Faced with the unaccustomed expenses that Relinque's demands inevitably involved, some powerful families in the town found themselves out of pocket, and attempted to resist the changes. The authorities, however, were prepared to make no exceptions, and ordered them to pay. Finally, the Mayor, Tebedeo Velázquez, and several other wealthy citizens, surprised Relinque as he was walking through the churchyard, and threatened him. Relinque replied coolly that he merely sought justice, and Velázquez retreated to his house in a fury.


During the next four years, Relinque and his supporters pressed for comprehensive reforms and a definitive shift in the balance of power. Their strength was the legality of their claims. Although in 1307, Fernando IV had given the administration of Vejer, with its castle and fortifications, and its existing and future population, to Alfonso Pérez de Gúzman, this did not imply that Gúzmán had proprietorial and seigniorial rights over the town. As part of the agreement, Gúzmán had been bound to observe existing property rights and privileges.        In 1539, Relinque presented the courts with a demand for full restitution of all rights.  expressed in fifteen different points. The Duke responded with bluster, repeating his assertion of ownership, and showing complete ignorance of the law. Evidence of Fernando’s decree was produced, and the Duke’s arguments were dismissed. Years later, he was still muttering about ‘time immemorial’ and ‘ancient laws and customs.’
The Duke’s party, aware that the point was lost, attempted to stop the process by an agreement with the people of Vejer, and collected some signatures in their support. In 1542, the people of Vejer went back to court to challenge the agreement, which, as Relinque pointed out, was divisive. The court agreed that no agreement could cancel out the rights of the citizens of Vejer, but the issue rumbled on until 1565, when Relinque's interpretation of the law was finally ratified.
By this time, both Duke Juan Alonzo and Relinque himself had died. In 1566, the judges of the King’s court issued a condemnation of the ducal house of Medina Sidonia, and ratified all fifteen points of Relinque’s plea of 1536. Although the Dukes dragged their feet when it came to putting the decrees into effect, making further rulings necessary in 1569, and even as late as 1627, the point was won.
The Dukes of Medina Sidonia were not financially ruined by the new arrangements and continued to be the richest family in Spain, with significant influence on the monarch and his government. Alfonso’s grandson, Alonzo, commanded the Spanish Armada in 1588, and was disgraced when it failed; his subsequent withdrawal from public life had a negative effect on trade in the area.

Juan Relinque García died in 1554. He comes down to us as a Robin Hood of his time, one who used the law to defend his people’s rights against a grasping aristocracy. Little is known about him, but what we do know suggests a man of conscience and a firm will. Although he seems not to have had children of his own, in 1541, he adopted a foundling child, a girl whom he named after his wife, Leonor. The girl is not mentioned in his will, suggesting that she died young.
Juan Relinque was clearly a man of parts, a skilled and intelligent interpreter of the law, and an obstinate defender of justice. He was also a man of religion, whose final wish was that he should be buried in the parish church of El Divino Salvador. His bequests were small, but included a few vines, some land, an ass and eight doves. His legacy, the freedom and prosperity of the people of Vejer, is incalculable.

The Hazas are allocated via a sorteo (lottery), which takes place on December 22nd every four years. The next one will take place next year, in 2016. The sorteo might have disappeared when the Church and nobility lost their privileges in 1835. Administration of local lands fell to the local authority, and might have produced a handsome income. However, the Mayor, José de Luna, recognised that the sorteo was an ancient tradition and part of the town's patrimony, and insisted that the sorteo should be retained as the most equitable way of allocating the Hazas among Vejer's citizens.
Nowadays, Vejer possesses 232 hazas, distributed between thirteen areas, amounting in total to 3,489.80 hectares. These are administered by the Hazas Committee, which consists of 17 councillors and 17 representatives of Vejer society, presided over by the Mayor. The current administration is seeking recognition of the sorteo as an example of the Intangible Heritage of Mankind. Tour group 'Las Marimantas' run a walking tour of Vejer which includes the story of the Hazas de Suerte.

The link below shows one of Vejer's Carnival groups' representing the story of the Hazas in song:

https://www.youtube.com/watch?v=wVu0g0bytX0
Posted by Unknown at 19:49 No comments: