The Shelly Family of Vejer

When I wrote my history of Vejer, I mentioned in its introduction that the presence of the English name of Shelly, well-known through various streets and buildings around the town, was something I could not explain. The name Shelley belongs to one our most famous British poets, and I couldn’t help wondering if this Shelly, though spelt differently, might have some connection with the writer.

Having read that the first Vejeriego Shelly had appeared in the town after marrying a woman from Valencia, I suspected that the original Shelly might have been a member of one of the naval families who settled in that area during the occupation of the island of Menorca (1713 - 1756 and 1763 - 1782). However, I could find no evidence for this, and the history of one of Vejer’s formerly most influential families remained an enigma for the time being. During a recent visit to the UK, however, I sought the help of a more profesional historical researcher than myself, and he was able to help me unravel the mystery. The Shelly whose descendants reached our town at the end of the eighteenth century was not English but Irish, and not a sailor but a soldier.

There are two distinct and separate ‘Shelley’ families in England, an English branch which  originated in Yorkshire and established itself in Essex and Suffolk and another which flourished in Sussex, established by Irishman Sean O Sealbhaigh, who fought alongside William the Conquerer in the Norman occupation of England. The poet Percy Bysshe Shelley was one of the Sussex Shelleys, but though his uncle, Captain John Pilfold, was a famous Naval Commander who served under Admiral Nelson during the Battle of Trafalgar, this does not connect the poet with the Vejer branch of the family.

Another possible explanation for the Shelly presence in Vejer might have been religious persecution. Manuscripts kept in the Essex records office for the period 1567-1653, during which time Protestantism was established as Britain’s only permissible religion, show that an Edmund Shelly was imprisoned ‘for religion’s sake’ and maintained links with ‘papists’. It seemed possible, therefore, that the first Shelly to appear in Spain was a Catholic immigrant seeking freedom from religious persecution. However, Spanish sources tell a different story. The Spanish branch of the Shelly family, it seems, arrived direct from Ireland in the form of Cornelio Shelly of Kilkenny, one of the Irish soldiers who left to serve in continental European armies in the 16th, 17th and 18th centuries, the ‘wild geese’ as they were poetically described. Cornelio served in the Regimiento de Infantería Extranjera Irlanda nº 1, a regiment which served in Cuba as well as mainland Europe.

Connections between Ireland and Spain have existed since time immemorial, and by the time  Cornelio Shelly put in an appearance in the late eighteenth century, military links were well-established. Since the early 17th century, Roman Catholics had been banned from military and political office in Ireland, and those with military ambitions were obliged to seek opportunities abroad. Three Irish regiments operated in Spain and though many soldiers eventually returned home, others remained and took Spanish nationality, the best-known of whom was Alexander O’Reilly, originally from Dublin, who served in Cuba before becoming the second Spanish governor of Louisiana. Like O’Reilly, the Cornelio Shelly family established themselves in Spain, where they achieved distinguished military and political careers. Cornelio and his wife Mary McCarthy eventually put down roots in Alicante where he died in 1817, leaving behind a family of eight surviving children.

Cornelio’s children all seem to have done well in their new country, building on their father’s distinguished record of military service. Margarita, born in 1797, married a nobleman, Antonio de Padua Castellví. Their daughter Elena Maria married a Royal infante, Enríque María de Borbón y Borbón-Dos Sicilias, the Duke of Seville. The Queen considered their marriage a misalliance, and the couple had to elope, finally settling in France. Once there, Enríque begain to show left-wing sympathies and was stripped of his titles and rights to the throne.  Cornelio's other children also married well or achieved high ranks in the Army.


When Mary died, Cornelio married for a second time, to another Irishwoman, Mary Comenford. Their son Ricardo Shelly, born in 1811, was probably the most important of the Shelly tribe. He began his officer training at the age of 12, progressing from director of the newly reformed School of Cavalry under Queen Isabella to a political career as a senator, and the Captain Generalships of Andalucía and Galicia. He was regarded as one of Isabella’s most important advisors, ‘The Third Lance of the Queen.’ His career was brought short by his early death at the age of 44 when he succumbed to the cholera epidemic of 1856. He was buried in Cádiz.

With so many connections in Seville and Cadiz, it is not surprising that sooner or later, a  member of the Shelly family found his way to Vejer. Edmundo Shelly McCarthy, born in 1796, a son of Cornelio’s marriage with his first wife, became a colonel of infantry, and in 1819 married Teresa Calpena of Valencia. Edmundo’s son, Antonio Eduardo Shelly Calpena, probably came first to Vejer to run the Post Office, married Dolores Castrillón, his first cousin and member of another leading Vejer family and settled permanently. He was eventually nominated as an adopted son of the town. Eduardo was a liberal politician who had something of a reputation as a friend to the poor. A street was named after him ‘Calle Eduardo Shelly’, which rises from Jose Castrillón towards Rosario.

Eduardo and Dolores’ son, Ricardo Shelly Castrillón was born in 1856, presumably named after his famous uncle, who died the same year. A lawyer, senator and president of the Diputación de Cadiz, in 1896 Ricardo was appointed Lieutenant General by Queen Isabella for his distinguished service to the Crown. In 1900, he was listed as Vejer's sixth wealthiest resident, his holdings amounting to 12000 reales.

In about 1880, the Shelley family acquired a house at Calle José Castrillón 22 for the use of Ricardo Shelly and his family, close to the road which was named after Eduardo. Formerly a ruined property owned by the church, the house had been rebuilt around 1842 and had subsequently come into the hands of the influential Mora-Figuera family before passing to the Shellys. The house is symmetrical and well-constructed and commands stunning views across the countryside towards Medina Sidonia, as well as a substantial facade on José Castrillon. It has two patios and once boasted a garden, though this is now a restaurant. For many years the building was the site of the La Janda language school, and as a teacher there, I often used to look around my classroom and wonder what family activities were undertaken there by Ricardo Shelly and his family.

A Spanish-language website http://shelly.es/album/documentos.php gives detailed information about the Shelly family, including original documents, though this does not relate specifically to the Vejer branch of the family. 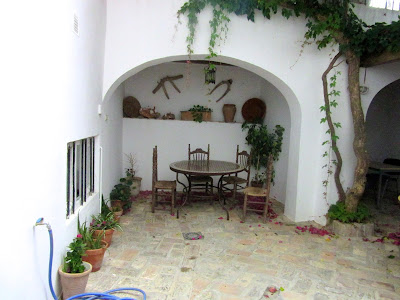