Manuel Torres - Father of the Poor.


It's been a hectic summer here in Vejer, and I take my hat off to the Ayuntimiento for their persistence and efficiency in managing a virtually non-stop programme of events and entertainment. Variety of pace is one of the delights of living here, and after the crush and squeeze of the August Velada, it’s pleasant to find the town a little quieter as the first days of autumn begin. I’ve started my early morning walks through the town again and am relishing the morning mists, my friends, the street cats, and the first signs of life as the town wakes up to another day.


One thing I couldn’t ignore is the work being done on Calle Manuel Torres, which rises to Lanería from Juan Relinque, turning upwards opposite Altozano. This part of town developed in the 18th century, when tradesmen and wealthier artisans began to move out to the suburbs beyond the Convento San Francisco. Several large houses survived the earthquake of 1773, but new building continued throughout the 19th and 20th centuries. 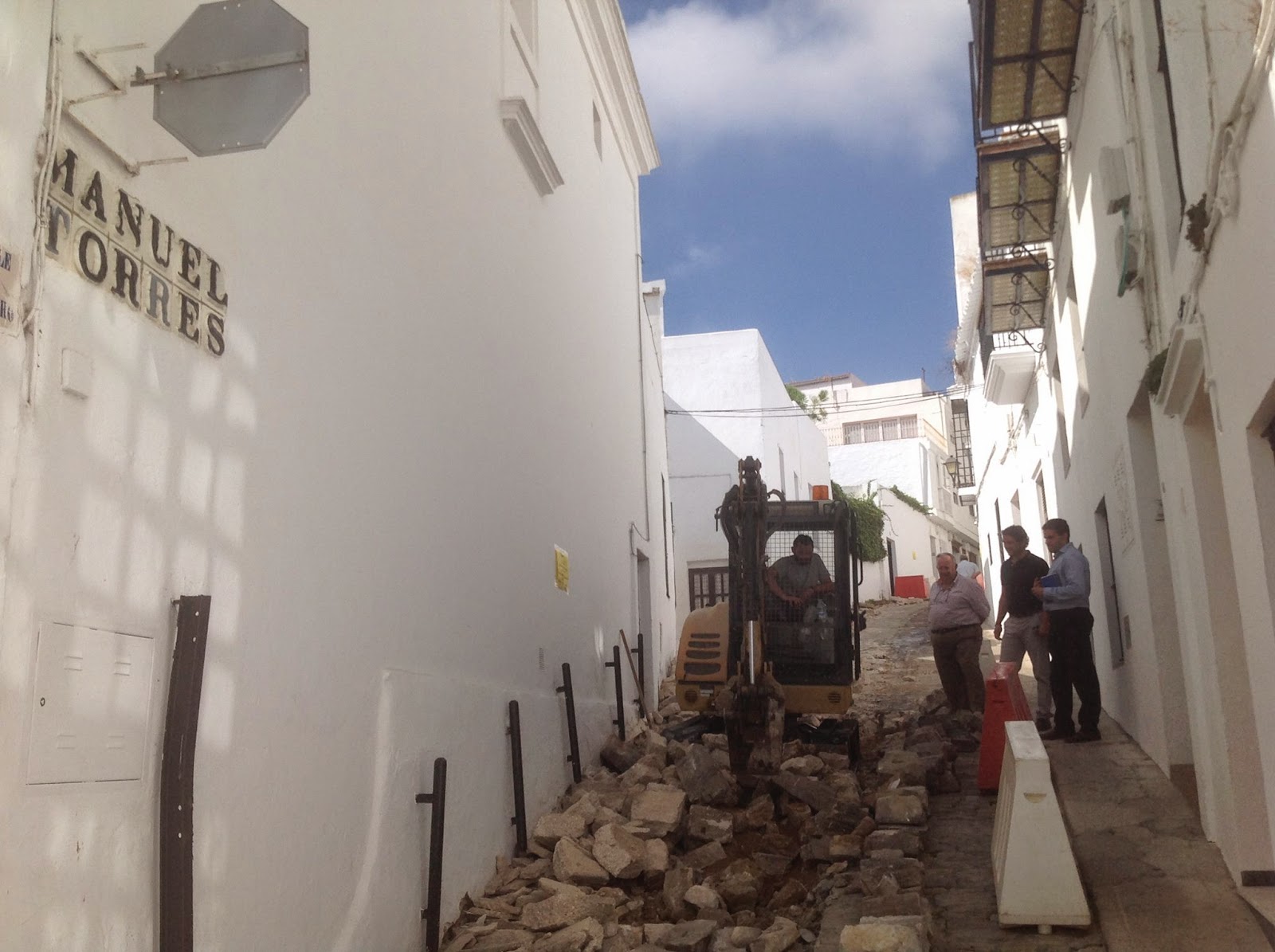 The current project will repair and renew the cobbled street surface, making it more accessible to disabled users, improve the pavements and lay down pipelines for utilities and future fibre-optic cable. This will make it safer and more comfortable to use and provide better access to services for all its residents.

Calle Manuel Torres now contains several large and impressive residences, which once would have housed big households including servants and members of the extended family. Several of these, alas, have fallen into disrepair, though others have been restored. It was in one of these houses that a tragic event occurred in August 1869.

Until recently, Calle Manuel Torres was called ‘Calle Yeseros’ after the members of the plastering trade who once congregated there, and the old street sign is still visible, a piece of Vejer’s history that we can read right off the walls. In the twentieth century, however, it was named after a famous Vejeriego who lived and died there - the crusading rebel turned politician, Manuel Torres.

After the proclamation of the Constitution from Cadiz in 1812, Spanish politics polarised into liberal and conservative factions. Confusingly, these became known as the moderate liberals, the conservatives, who did not support the Constitution, and the progressive liberals, who did. For the next century, control would oscillate between these two factions, and many violent and lawless acts ensued in the process of maintaining the balance of power. Between 1823 and 1874, there was a rebellion somewhere in Spain on average every ten months.

Manuel Torres was very much a progressive. A lawyer by profession, in March 1831, he was one of the young rebels who supported the attempted revolution led by Cristóbal Jurado and his associates, and spent several months in prison for his pains. By 1840, however, he had become the leader of Vejer’s progressive liberals and the Mayor of Vejer, in which role he quickly acquired heroic status for his efforts on behalf of the people. During his time in office, Vejer’s council transferred much of its property into the hands of the poor, and about a thousand country people received a holding of some kind. He was soon being described as ‘the father of the poor’.


By 1869, however, the balance of power had shifted in the other direction, and a conservative mayor was in power in Vejer. Torres, now in his sixties, continued as a councillor on the opposing side, causing untold annoyance to his opponents. At 11 o’clock on August 26th of that year, he was resting at home when his wife, Carmen, answered a knock on the door of their home at 8 Calle Yeseros (now number 20). She received two visitors, who asked for her husband, and left them to talk in the patio while she attended to a request from the maid. A few moments later, she heard her husband call out ‘Carmen, they are killing me!’ She ran downstairs to find her husband doubled up in his chair with blood pouring from his side. He stood up, took two steps towards her, and collapsed.

The two visitors were arrested the following day, and one of them admitted responsibility for the murder. He was imprisoned, but released almost at once on payment of a large sum of money collected by the town’s conservative community. The maid was bribed and Carmen was declared to have been so unbalanced by her ordeal as to be unable to make an identification. Despite his confession, the murderer took his place in society again as though nothing had happened.

Carmen never recovered from the shock of the event and the injustice of its resolution, and for years, she could not bring herself to move Manuel’s bloodied clothes from where they lay in the patio. The motivation for the murder, however, was probably not political. Historian Antonio Muñoz discovered evidence that Manuel Torres had angered the two men by acting against them in the matter of a will. The political element probably only emerged in the manner in which the murder was dismissed and the murderer absolved by the current administration.

Manuel Torres' house still stands on the corner of the street which bears his name, though it is now unoccupied and neglected. It seems a shame that a site so significant in the history of Vejer should not be better loved.