The Processions of Semana Santa 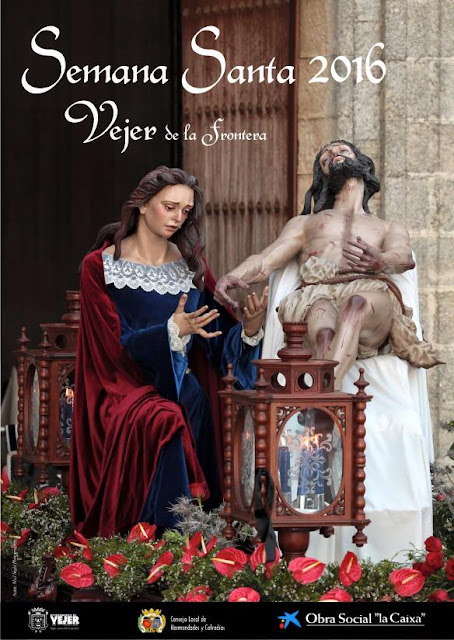 The Easter processions, with their candles, hooded habits and swaying floats are part of the iconography of Spain, and anyone who visits will want to see them at least once. Vejer holds five processions as part of the programme of Easter celebrations which also include several special masses and the Toro Embolao event on Easter Sunday. However, not all towns are the same, and in neighbouring Barbate, there will be eight processions, each with its own special character and tradition.
The large floats are carried by between twenty and thirty-five people directly underneath, who are concealed under drapes. When a whistle blows, they take a break, and you will see shadowy figures checking their phones or even having a crafty cigarette.
The processions, each of which has its own special name, commemorate different episodes in the Easter story. Each one is arranged by a different hermandad (religious brotherhood) or cofradía (a trade or professional association which now has a mainly religious function.) The different robes and hoods seen at processions belong to the different brotherhoods conducting the processions, though others are also represented. Most processions are accompanied by the town band, and like everyone else, Spain celebrates Easter with flowers, an important symbol of spring and rebirth.
Processions  usually feature a large float carrying a three-dimensional representation of Jesus, and usually one with the Virgin Mary as well. Some of these statues are old and valuable, and each Virgin appears in a different embodiment, according to which hermandad is conducting the parade.

The most important day for parades is Thursday, marking the Crucifixion, though unlike Barbate, Vejer does not hold a separate midnight parade. Instead, the ten o’clock parade continues until around 2.30 a.m.
Here’s some information about the different processions, with thanks to Miguel Ángel Romero:

La Burrita (the Little Donkey) This procession, which in Vejer is celebrated by masses in all the churches of the area, commemorates Jesus’ arrival in Jerusalem at the beginning of Holy Week.
The procession is  conducted by the Cofradía de Penitencia del Santísimo Cristo del Amor, María Santísima de la Paz y Nuestro Padre Jesús en su Entrada Triunfal en Jerusalén. The Barbate procession begins at 5 p.m. and includes many children. No hood is worn in this procession, and the participants wear brown and white robes.

Ecce Homo. This is the man).  This procession commemorates Jesus’ trial by Pontius Pilate. In Barbate, the procession takes place at 8 p.m. and the celebrants wear the official robes of the Cofradía: a light beige tunic, red cape, shoes and belt. In Vejer, the procession begins at 8.30 and takes the following route:

El Huerto. (The Orchard). The procession, which does not take place in Vejer,  commemorates Jesus’ last night in the Garden of Gethsamane. It is organised by the Venerable Cofradía de Penitencia de Nuestro Padre Jesús de la Sagrada Oración en el Huerto y María Santísima de Gracia y Esperanza. The habit consists of a bone-coloured tunic, cape, hood and belt in olive green.
The procession leaves the parish church of Barbate at 8.30 p.m.

Medinaceli. This procession commemorates Christ’s suffering while in prison. It is conducted by the  Hermandad de Ntra. Sra. de la Oliva Coronada, featuring an 18th century statue of Jesus in the Genovese style. It takes place in the new part of Vejer, beginning at 10 pm.

Ardero - The Nazarite
The procession, which commemorates the Way of the Cross, is conducted by the Venerable Hermandad de Ntro. Padre Jesús Nazareno, Maria Santísima de los Dolores y San Juan Evangelista, and features a statue of Jesus from the early eighteenth century. The robes of the hermandad consist of a purple tunic, gold belt and white cape.

The procession leaves the parish church at 10 o’clock and returns at 2.15 a.m. A similar procession takes place at 8.30 in Barbate.

Amor (love). (Barbate only)
This moving and deeply impressive parade commemorates the Crucifixion. It is conducted in total silence with no children present. The penitents are robed in black. The procession is conducted by Cofradía de Penitencia del Santísimo Cristo del Amor y María Santísima de la Paz and leaves the parish church at 2 a.m.

Resurrection. (Barbate only). This joyful procession is replaced in Vejer by the Toro Embolao event, following an ancient custom. In Barbate, it usually begins at 12 p.m., and represents all the cofradías and hermandades.