I thought my recent publications about the Civil War were a bit short on local detail, so I decided to pay a call to local historian Ángel Tinoco in his shop on Juan Bueno. Could he tell me anything about local events during the period in question, around 1936 to 1955?

Ángel loves to talk about Vejer and its history and folklore, but on this topic, his lips are sealed.

‘It’s a taboo subject’, he said, adding that as the years went by, there were fewer and fewer people left who would object to having their, or their families’ stories told, and that once the floodgates were opened, there would be much to talk about.

Meanwhile, stories of the past are not the only, or even the main reason for visiting Ángel’s shop. A radio repair man by trade, he has a remarkable collection of old radios and other early machines and devices, neatly arranged in a small museum, one of Vejer’s less visible attractions but surely unique.

Ángel is always pleased to show you around and answer questions, and even to sell you a fan, decorated plate or chandelier for your ceiling, as well as many other electrical objects. His shop is one of a dying breed, rooted in the days when few people travelled far and you could buy everything you wanted within a few streets of where you lived.

His story begins in the 1920s, when his father, a cobbler, found that new, mechanised methods of shoe-making were taking over, reducing his clientéle and devastating his income.

‘It was a time of extreme poverty,’ Ángel explained, ‘and people were struggling just to find something to eat. Factory-made shoes were more affordable, and many people had to go without shoes altogether.’

Ángel senior, however, was a resourceful man, and he had heard that electricity was the coming thing. He got hold of a book called ‘Electricity and its Uses’, and discovered that although mains electricity was not available in Vejer, many household items could be connected to large batteries, creating a huge saving for the householder in terms of energy and effort. The new activity helped to offset the losses he was making in the shoe trade, and the family were a little more comfortable as a result.

Both Ángel and his brother were intrigued by this new technology and they subsequently trained as plumbers and electricians. The big breakthrough came in 1959, when mains electricity was installed in Vejer. Over the next decade, many young people left Spain to work overseas. The money they sent home made it possible for their families to invest in appliances like refrigerators, washing machines and televisions.

Ángel, meanwhile, devoted his energies to repairing these acquisitions, specialising in radios and TVs. Some, however, he could no nothing with. These were the appliances made overseas, At the time, Spain used a 110 volt current, while the rest of the world was on 120, and since conversion was not yet possible, a collection of surplus radios began to build up in his workshop, along with the occasional gramophone and sewing machine. It seemed a shame throw them away and as time went by, many of them became genuine curiosities, with an impressive international range. The nucleus of the museum began here.

Meanwhile, the original cobbler’s shop was past its best. Over the years, it was rebuilt and extended, creating more living space upstairs, as well as a substantial workshop. Ángel Tinoco’s shop became the place to go for small electrical goods and repairs, and as the defunct radios threatened take over, he created his museum, unique in Vejer, and maybe unmatched anywhere.

Though the Internet and the large electrical mega-stores now predominate, and faulty items are rarely repaired, Ángel’s shop is still trusted by older people and those in a hurry. His stock has diversified into a range of souvenirs and objects of interest, and above all, if you want information about the history of Vejer, Ángel is the man to ask.

Although Ángel had little specific he was willing to divulge about the Civil War era, he did tell me one amusing tale from his childhood. In 1946, when Ángel was 7 years old, a demonstration, as he ironically termed it,  occurred in Vejer. It was a time of acute poverty, and many people were hungry. The only things that were not rationed, it was said, were ‘fish smoke and ginger’.

Spanish hospitality was strained to its limits in this era, and children were warned that if they visited another house, though they might be offered food, they should always refuse it. Saying ‘yes’ might result in somebody’s going without their supper.

Most in demand were coffee, bread, sugar and, most of all, oil. Jokes went around in whispers, comparing Franco’s Spain to a leaky old car spouting oil from every orifice, and making it clear that olive oil was the only exportable product Spain possessed. Not only that, but the proceeds were dedicated to providing luxury products for the ruling classes. Nobody cared about a little town like Vejer.

At the time, Spain’s trade was blockaded by most of the world’s nations, in protest against Franco’s dictatorship. However, the blockade had little effect on the régime and though there were protests against the blockade, the people did not openly challenge Franco’s power.

In those days, children liked to play out in the street when they could, but though they caused no damage, if they were spotted, the authorities made a point of chasing them home. One day, Ángel and four of his mates were playing on the steps at the bottom of Calle Nuestra Señora de las Olivas, where we now find the Café Central, when the Mayor, the Chief of the Falange and the Chief of Police came by.

‘Children, don’t run away,’ they said, ‘come with us and repeat in a loud voice what we tell you.’
The children were puzzled, but felt important to be able to help the authorities. They set up the  chant as requested: ‘Franco yes, communism no!’, repeating it until it became almost like a song. The streets filled up, men, women and children, old and young, all shouting these words, not for political reasons but because it had been wrongly rumoured that anyone who joined in would get a supply of much-needed oil.

The demonstration moved up the street to today’s Begines bar, in front of the church. The doors were closed, but Ángel was fairly sure he would find his uncle Antonio inside. And indeed, when he opened the door of the bar, it was full to the rafters with men, all chanting, not the anti-communist message the children had been told to spread, but the distinctly heretical ‘Franco yes! Oil, no!’

You can find his shop and museum on Calle Juan Bueno 26. 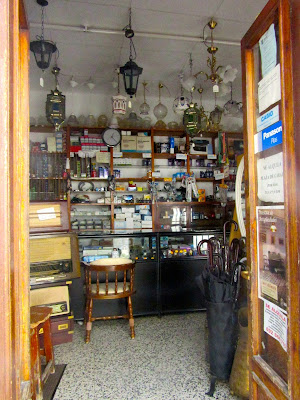