The Civil War - the Maquis, resistors of tyranny.

‘Maquis’ is a term which describes the guerrilla fighters of the French resistance. During and after the Spanish Civil war, it was also applied to the fighters who opposed Franco’s fascist régime. Shadowy, elusive, known only by nicknames, these were the fighters who refused to accept Franquismo, and struggled on for years to defeat a totalitarian régime. Members of the Maquis practised both large and small-scale resistance, from cutting cables and blowing up bridges to armed conflict.

For many years, the guerilla campaign against Franco was a taboo subject. Anyone who showed an interest in the topic was likely to lose their job or even to be imprisoned as an enemy of the state. Open discussion of the subject only became possible after a democracy was established in 1978.


However, the existence of the Spanish Maquis was well-known. Officially described as ‘fugitives’,  or 'bandits', to the ordinary people of Spain, they were ‘the reds’ or ‘the mountain people’. They were ‘Zaragata’, ‘el Chanca', ‘el Titi', ‘el Quinto de Coín’, ‘Pandaretas’, ‘Tabardillo’, ‘el Coripeño’ and a thousand others, lovingly or angrily nicknamed.

After the Civil War ended, the Maquis entered into folklore. Bandits, maquis and those scary harvesters of human flesh, the sacamantecas, were all lumped together in story and legend until Manuel Pérez Regordan of Arcos de la Frontera decided to bring the subject into the open. He began to ask questions in his local area, persuaded sometimes reluctant witnesses to share their memories and in 1987, finally published ‘El Maquis en la Provincia de Cadiz’, a record of the members of the Cádiz Maquis and their activities.

Resistance to Franco’s Nationalist rebellion began as early as in 1936, when ‘The Army of the Reconquest’ challenged Nationalist occupation of towns in Galicia and León. In response, the Nationalists gave XIV Army Corps the responsibility for suppressing opposition. Many of the corps’ activities were focused on Andalucía, where a tradition of anarchism gave an edge to protest. Francisco Gómez ‘El Cerreño’ escaped captivity in 1936 and formed an organisation whose activities ranged across the whole of Andalucía until he was detained in 1949 and sent to France. Four guerrillas under the orders of ‘Tabarrito’ created mayhem in Granada until 1942, when they were killed in a confrontation with the Army.
The first generation of guerillas was composed mainly of fugitives from Franco’s justice. After the fall of Huelva on July 29th 1936, almost a thousand Republican soldiers remained in the area, gradually dispersing into the mountains, where they formed themselves into guerrilla groups. Gradually, the groups of outlaws became more organised, and by the nineteen forties, their efforts were directed towards overthrowing the régime.

Despite publicly minimising the Maquis’ political impact, the government privately recognised them as guerrillas fighting against the régime, and pursued them without mercy. As the Maquis proliferated,  the government tried at first to suppress them by the use of military force. However, it soon became clear that such an elusive enemy could not be contained by conventional means, and the Guardia Civil, with its local knowledge and ruthless methods, was given the job of dealing with the guerillas. Much of what we know about the guerrilla resistance to Franco’s régime comes from records made by Roger Oliete Navarro, who rose to the rank of Lieutenant General of the Guardia Civil.

The word ‘Maquis’ entered the Spanish vocabulary in 1944, when an infiltration of Spanish Republican exiles was organised in Toulouse with the ultimate ambition of overthrowing Franco’s government. The forces, led by Colonel Vicente López Tovar, first established themselves at Foix in the Pyrenees, intending to gather support among the local people, prior to launching an attack. Around 10,000 people prepared themselves to confront the régime. The attack only lasted for ten days before being defeated by the combined forces of the Army, the Guardia Civil and the Carabinieri. Three hundred were taken prisoner and the remaining survivors dispersed in the mountains, from where they would continue to fight a guerilla campaign.

Despite what the régime wanted people to think, resistance to Franco was not a matter of a few ‘fugitives’, but an organised movement with strong links and cohesion. Many guerrilla groups had a distinctly political orientation, reflecting the ideals which had informed Republicanism from the outset. In Ronda, the ‘Stalingrad Guerrilla Group’ was founded in 1943, not to be confused with the 25-strong ‘Antifascist Guerrilla Group’, founded in Seville in 1949.

The different factions of the left managed to resolve most of their differences in 1945, when the ‘National Union of Antifascist Guerrillas: Southern Section’ was formed, to be followed by the ‘Alliance of Democratic Forces’ in 1946, led by Bernabé López Calle, with a base in the Campo de Gibraltar. All these groups possessed written statutes and organisational structures. In 1945, the defeat of Fascism in Germany led many to believe that Fascism’s last hour had come. Guerilla activity halted for a while, but when nothing changed, the Maquis resumed their activities.


The town of Alcala de los Gazules was a local centre for the activities of the maquis. From its heights, Vejer and Medina Sidonia are clearly visible, as well as a large part of the Straits of Gibraltar. Other mountain villages saw concentrated guerrilla activity, including nearby Arcos de la Frontera, Medina Sidonia, Castellar, Jimena and Cortes. Several groups were organised from Jerez. The famous Arcos guerrilla leader, Miguel García Parra, was featured in a Carnival ‘comparsa’ in 1948:

‘The twenty second of September,
We will always remember
The pistoleros came
For Miguelito García.
They took him from his house
To steal his money
And his mates’ money too
To give to the priest.
Don Miguel said
‘If you want me to come
Ride with me to the farm
And seizing the moment,
Courageous and valiant
He ran from those thieves,
Those murdering villains. 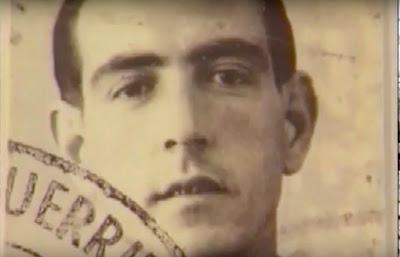 The coastal towns did not see as much guerrilla actions as those in the mountains, for obvious reasons, and what activity occurred was often recorded as simple crime, without any political context. However, there can be no doubt that Vejer was involved with resistance groups. In May 1941, one guerrilla, José Ramos Olivete ‘The Pirate of Vejer’, was caught with two other rebels while robbing a flour factory in Alcalá in1941, and subsequently executed at Jerez. Flour was in constant demand among the guerillas, and fighters would go to any lengths to obtain it. On18th May 1949, a Vejer shopkeeper, Demófilo Vitorique Merino, received an anonymous demand under threat, to deliver certain objects to the Maquis. He reported the matter to the civil guard who arrested Valentín López López, Francisco Aguayo Navarro and Luis Cardoso García.

As I said at the beginning of this article, it was customary for the régime to minimise the activities of the Maquis, and to pass off their activities as simple crime. It was easy to do this, because most guerrillas engaged without scruple in robbery and even kidnapping to achieve their ends. One amusing story recounts how a child was kidnapped by a leader of the Maquis. The only response came from a local shop, which complained bitterly that its supplies of chocolate had been depleted. After he had been ransomed, despite repeated questioning, the boy refused to betray his abductors, who he said had treated him ‘very kindly’.

The operations of the Maquis would have been impossible without the support of the ‘enlaces’, (links) the women and men who lived as normal citizens in the towns and villages and provided the guerrilla fighters with supplies and information. If caught, they were punished as severely as if they had taken part in the fighting, and although we cannot quantify their part in the struggle against Franco, for every guerrilla fighter, there were several more working secretly within the community. Many were women, the wives or sisters of the guerillas, but many men were also involved. About 20,000 people were executed for helping the Maquis, and so many people were placed in concentration camps and gaols that Franco’s Spain has been described as ‘one immense prison’.

Despite their best efforts and an enormous amount of sacrifice, the Maquis never managed to defeat Franco. The forces ranged against them were well-armed and numerous, and they had no compunction about using torture and intimidation to weaken support in local communities. The Guardia Civil laid many towns to waste in order to root out ‘traitors’.By the mid 1950s, the American presence in Spain had kick-started the failing economy and a new generation had grown up which had never known life before Franco. The régime produced stability, albeit at the expense of freedom, and repression became the new normal. Many older people today look back with nostalgia on a time when ‘moral’ standards were enforced and conservative values upheld.

Thousand of Maquis were killed during the period of resistance, and many others imprisoned. The lucky ones were able to escape, and many returned to Spain when the fuss had all died down. The real number of deaths will never be known. Too many were summarily executed and buried without honours. The deaths are recorded only in local legend.

As well as fighting in the Spain, the Spanish Maquis made a contribution to the efforts of the French Resistance during the second world war. Martha Gellhorn wrote in The Undefeated (1945):